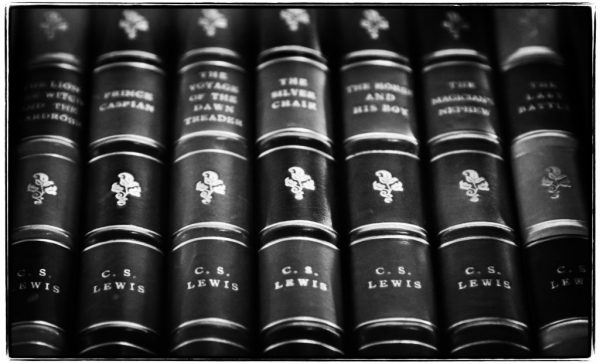 There’s only one right order to read the ‘Narnia’ books!

It doesn't solve world problems, but I like my strong opinions about small things that matter for me. As why I think the chronological numbering used by the Chronicles’ publishers today is a travesty.

Whatever the deficiencies of the Narnia movies to date, at least the filmmakers did one thing right: They followed the original publication order, which is how many or most editions numbered them until about 20 years ago.

Starting in 1994, the Chronicles’ current publishers embraced a different numbering system. This order is basically chronological, shifting two books, The Magician’s Nephew and The Horse and His Boy, so that they appear, respectively, before and after The Lion, the Witch and the Wardrobe, resulting in this order:

The publishers claim, unconvincingly, that this reordering reflects Lewis’ preference, based on a letter Lewis wrote to a young American fan that preferred the chronological order (against his mother’s preference for the publication order). Lewis wrote:

"I think I agree with your order for reading the books more than with your mother's. The series was not planned beforehand as she thinks. When I wrote The Lion I did not know I was going to write any more. Then I wrote P. Caspian as a sequel and still didn't think there would be any more, and when I had done The Voyage I felt quite sure it would be the last, but I found I was wrong. So perhaps it does not matter very much in which order anyone read them. I’m not even sure that all the others were written in the same order in which they were published."

Needless to say, a kind note to a young fan is hardly evidence that Lewis really preferred the chronological order; in any case, I’ve never met a real Lewis fan who agreed. Certainly I consider the chronological numbering system a travesty, since I maintain that the only right way to discover the Narnian world is the way Lewis “discovered” it, which is basically (with a caveat or two; see below) the original publishing order.

I’m not saying there’s anything wrong with reading the books in chronological order once you already know them. This is actually an interesting exercise and brings out all kinds of little tensions in the stories that help you appreciate how they actually grew in Lewis’ mind — i.e., basically, in the publication order.

Lewis built up the Narnian world like an artist beginning with a doodle somewhere in the middle of the page, and then elaborating the picture, first this way, then that, finally winding up at the edges with a finished picture.

Specifically, Lewis began with a poetic picture that had long been in his head — essentially the picture at the end of chapter 1 of The Lion, the Witch and the Wardrobe: a faun carrying an umbrella and an armful of packages standing under a lamp post in a snowy wood. He ended at the “edges” with The Magician’s Nephew and The Last Battle relating the beginning and end of the Narnian world, its Genesis and Revelation.

No artist begins doodling at the top left corner of the page and works his way down and across to the bottom right — and nobody first looks at a drawing that way either. Rather, we begin with some focal point and then follow the compositional flow around the picture. Observe how Lewis methodically explores the Narnian world from one book to the next in various dimensions of time and space:

Note that there is a natural break between the first four stories and the last three stories. The first four stories, despite their differences, all share a common structure of English children being transported to Narnia and then returning to England. Furthermore, they all share an overlapping cast of main characters on four successive adventures. The last three, by contrast, stand in a sense apart from the others. Each has a different set of main characters, and none is a direct narrative sequel to any of the others.

In books 1 to 4 in the publishing order, we follow four visits to Narnia by the Pevensie children, along with their cousin Eustace in the latter two books. Then, after four stories of the same type following the same overlapping cast, Lewis switches gears and gives us three different stories. (Here’s the caveat: It’s true that Lewis apparently wrote The Horse before The Silver Chair. However, he had The Silver Chair published first, presumably to maintain the continuity between Eustace’s two Narnian adventures. The Silver Chair references the tale of The Horse and His Boy, promising a story to come.)

The Horse and His Boy is the only book in the series that is not about children from our world who get into Narnia. Instead, it tells a story about characters that are native to the Narnian world. It happens to take place during the last chapter of The Lion, when the grown-up Pevensies are reigning as kings and queens of Narnia, but although the Pevensies come into it, it is not principally about them.

Because of its chronological setting, the new order places The Horse between The Lion and Prince Caspian, interrupting the flow between the Pevensies’ first two Narnian adventures. The last paragraph of The Lion reads:

That sentence, besides casting The Lion as book 1, sets us up for the Pevensies’ return in Prince Caspian. Turning away from the Pevensies for a whole book (except for their cameo as adults) to read The Horse makes no sense.

Let’s go back to that initial picture of a faun carrying an umbrella and an armful of packages standing under a lamp post in a snowy wood. It’s a magical, mysterious picture for a number of reasons: What is a mythological creature like a faun doing in a world with trappings like umbrellas and brown-paper parcels, let alone lamp posts? For that matter, why is a single, solitary lamp post in the middle of a wood?

The Lion proceeds to introduce other mysteries: a tall, imperious woman named Jadis who calls herself a queen but may be a witch; talking animals; and rumors of an unseen, unknown figure named Aslan who is on his way. (“None of the children knew who Aslan was, any more than you do,” Lewis writes.) And, of course, there is the mysterious gateway into the Narnian world: Why should a wardrobe be a door into this magical world?

Then there’s the old professor who hears the elder children’s concerns about Lucy’s stories, and appeals to logic and common sense to assure them that she is not mad and that the reasonable assumption is that she is telling the truth. He speaks vaguely about the mysteries of his house, but on the very last page the professor drops hints that he might have been playing with them a bit: that he might know more about Narnia than he let on, though he had his reasons for being tight-lipped.

The pleasure of these riddles does not in the least depend on discovering answers for them — but Lewis does answer them, eventually, in Magician’s Nephew. The professor has been to Narnia; in fact, he saw its founding. He had the wardrobe made from a tree that grew in London from the core of a Narnian apple he had planted along with magic rings that transported the wearer between worlds.

The witch Jadis is an evil creature from another world, and Aslan is the creator of the Narnian world. The lamp post, like the various accouterments of English culture, were introduced from our world at the beginning.

Reading The Lion for the first time, we are struck by mystery and wonder; when we get to Magician’s Nephew, we find ourselves saying “Aha! So that’s why…”

Reversing the order of these two books gives us the answers first and the questions second. By answering questions we weren’t asking, and then posing riddles we know the answers to, Magician’s Nephew loses much of its revelatory force and The Lion much of its mystery.

Reading Magician’s Nephew before The Lion also deprives the next book, Prince Caspian, of some of the force of the Pevensies’ startling discovery, upon returning to Narnia a year later, that 1300 years of Narnian time have passed. This discovery is only startling if Prince Caspian is our second foray into Narnia; if it is our third, and we know that the boy who saw the founding of Narnia lived to see four children who visited Narnia ages and ages after its founding, we won’t be as surprised by the passing of 1300 years of Narnian time during one year of our time.

So forget the numbering on the new editions. Read them the way Lewis published them — especially if you’re reading them aloud to children who have never heard them before, or who haven’t heard them in a while and don’t remember them well.