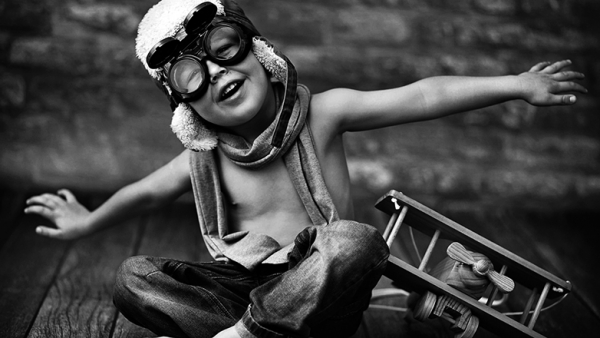 The Importance of Imagination

"I shut my eyes in order to see."
-Paul Gauguin

I have always had what people call a "vivid imagination". I see figures in the sky and faces in the shadows of dark laundry hampers, and every noise in my house is caused – I’m convinced – by a beast or critter just waiting to pop out from the wall. I’m not really superstitious, or believe in ghosts, but I like to imagine.

I think we all start out that way. As I got older and continued through high school and university, I learned that most people slowly lock away that part of themselves. They trade stories for “serious work” and frivolity with fact. Apart from a select few, most believe that imaginary things are not real - and therefore, not important.

Inklings, silliness and daydreams have no place in adult life. They don’t really matter.

I have a bone to pick with this idea. Imagination, in my opinion, is the biggest world-shaping quality we possess. Some might argue that our use of technology holds that honor, but where do you think *that* came from, hmm? Imagination. A-thankyou.

When we were closer to nature and to the patterns of life and other animals, we were much more open to stories.

Many of our first stories and ideas came from nature. We saw birds flying and wondered ‘could we do that? Years later, we developed planes. We told stories about animals and how they came to possess their qualities. We watched the sun rise and told a story about our place in the cosmos and wondered about the forces that caused the ocean tide.

What matters about these stories is not whether or not they are real. What matters is their effect on us. This effect is very real.

These fictions or stories we tell ourselves about the world matter because they change who we are. By entertaining the impossible, we change what is possible.

You don’t have to believe in wizards to believe that J.K Rowling has created a character who speaks in the heads of millions worldwide. I mean that literally – he exists in our minds just as surely as the color blue. This effect changed not only what it meant to be a writer, but also a reader. Harry turned non-readers into bookworms.

I want to tell you that imaginary things exist in ways that are just as important as facts.

Where I’m going with this…

One of my favorite books as a child was The Neverending Story. (It was also a movie, filmed a few years after the book). If you haven’t read it or seen the film, I highly recommend it. I loved it for its wildness, its message and of course, the luck dragon.

In the story, a magical world called Fantasia is being destroyed by an evil force called The Nothing. The Nothing, we learn, represents people’s lack of imagination in the real world. The two worlds are connected through our minds. What we imagine in reality is built in Fantasia.

As humans grow in the real world and dream less and less, the world of Fantasia is slowly devoured by The Nothing. The rich world of Fantasia, once built by childhood fantasies, doodles and stories becomes desolate and nearly empty.

The brave protagonist is given a talisman, called Auryn. This talisman protects him as he fights The Nothing. Two snakes, intertwined and biting each other’s tails represent the two worlds – imaginary and real – are wrapped in an infinity knot. On the back, the phrase "DO WHAT YOU WISH" was engraved.

Auryn reminds us to protect our imaginations from the “real world”. Most importantly, it’s a reminder that imaginary people, places and ideas do matter.

Just because something is imaginary doesn’t mean it isn’t real.

You don’t know how your imaginary ideas are going to affect the world. They could lead to a great invention, inspire people in crisis or pain or change the way we see each other.

So, the next time you hear a child get reminded to “get their head out of the clouds” – look him in the eye and tell him to keep his head firmly in the clouds, where it belongs.

As for you; do what you wish.