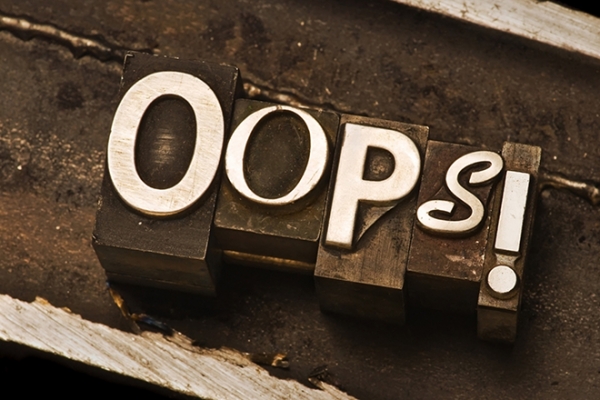 On the importance of making mistakes

Have you heard the story of Siegfried & Roy? The world-famous Las Vegas magicians…? Roy was mauled by his own tiger during a show. A pretty serious mistake. But I’ll come back to these idiots later.

I will address the importance of making and accepting mistakes, since there is a culture, especially in business, of intolerance of mistakes.

You make too many mistakes and you get fired. For good reason, for mistakes are bad, right?

Well no..., not always. You should learn the difference between a good mistake and a bad mistake.

We see mistakes as a sign of weakness rather than a valuable learning tool. We ignore the benefits of being willing to make mistakes, to take a risk, have the courage to try something that might not work and the integrity to accept the consequences.

The secret is to consider the consequences.
Have you ever heard of a happy accident? Sometimes mistakes lead to something good happening. But we're too afraid of bad consequences to allowing the good consequences a chance of occurring.

The secret is knowing the "Difference Between Bad and Good Mistakes"

Do you know what Mark Zuckerberg had written on the wall of the Facebook offices?

The slogan appeared on posters throughout the company's offices and was even featured in Facebook's IPO paperwork:

"As most companies grow, they slow down too much because they’re more afraid of making mistakes than they are of losing opportunities by moving too slowly."

Without making mistakes we can never learn and grow. If you're too afraid of making a mistake you will never make any progress on anything. All learning comes from mistakes. To be good at something you first have to be bad at it.

"What do you first do when you learn to swim? You make mistakes, do you not? And what happens? You make other mistakes, and when you have made all the mistakes you possibly can without drowning – and some of them many times over – what do you find? That you can swim!"
— Alfred Adler

The difference is between failing when you're trying something that might not work and be making an error through carelessness. Valuable mistakes are the well-intentioned errors or failures, not ones born of carelessness. Look at the possible cost of a mistake, if the cost isn't that great then take a chance. You will learn and grow.

You don't make mistakes unless you push yourself into uncomfortable places.

Most businesses have an intolerance of mistakes. Sometimes that's important. You don't want your surgeon making mistakes, do you...?
But when consequences aren't that severe praise effort, don't punish failure. Doing otherwise paralyzes staff with a fear of trying anything. They don’t learn from their mistakes, but rather get discouraged by them.

So, as a leader; How do you "Tiger Proof Your Business"?

Back to Siegfried & Roy, these guys had a business that wasn't "mistake proof". Look at another Las Vegas act: The Blue Man Group.

The Blue Man Group is 3 men painted blue. I'm not sure what they do in their show but they are extremely successful. But guess what, there are more than 3 of them, there's a whole group (clue's in the name). If one of them gets mauled by a tiger then one of the others just paints his face blue and steps in. Then it's business as usual.

Businesses need to create environments where it's ok for employees to make mistakes. To create mistake proof companies.

You need to make sure there are "Blue Man" areas in your business. Make it clear where and when in your business that mistakes are acceptable, encouraged or can never be tolerated. (Green, Blue, and Red).

Leaders must encourage workers to let go of their fear of making mistakes. Leaders should look at mistakes as opportunities to learn. And create a culture of improvement and not punishment.

To put this into perspective you can look at Mistakes People Usually Would be Fired For:

There's a famous Story about the CEO of IBM. A lower tier manager had made a decision that cost the company $10 million. He was called to see the CEO. Obviously, this guy thought he was going to get torn apart and fired. When the CEO was strangely sympathetic the manager expressed his surprise at not being fired. The CEO said:

"Why would I fire you? I just spent $10 million training you!"

There is a very similar story about Warren Buffett. One of his managers, David Sokol, recalls a meeting at which he planned to break the news to Mr. Buffett that he'd lost $360 million in a deal. Mr. Sokol says he was stunned by Mr. Buffett's response:

"David, we all make mistakes. If you don’t make mistakes, you can’t make decisions. You can’t dwell on them. I've made a lot bigger mistakes myself."

"I would have fired me if I was him."

That's the difference between a Leader and the average person.

"Would you like me to give you a formula for success? It’s quite simple, really. Double your rate of failure."
— Thomas J. Watson, founder of IBM

I’m not against tiktok. I’m against a community that sexualises underage girls, promotes dangerous trends, steals… https://t.co/61RCDjRY74
May 20 reply retweet
You can never predict what you’re gonna think next and will never know which memories you have forgotten.
May 09 reply retweet
You fingers have fingertips but your toes don’t have toetips, yet you can tiptoe but not tipfinger.
May 08 reply retweet
If you don’t look back in Life and think you were an idiot, then you’re probably still an idiot.
May 08 reply retweet
I read it on the internet, so it has to be true.
Apr 18 reply retweet